"Where the Coffee is strong, and the Company has the Sparc" 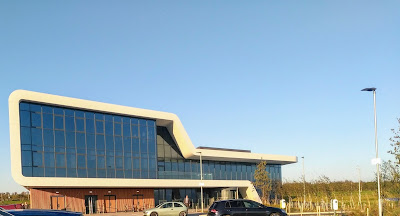 On Wednesday, Pryderi ap Rhisiart, the managing director of M-SParc (the Menai Science Park) posted the following message to Linkedin:

Great to have breakfast with our tenants for the first time in over a year and huge thanks to them for supporting and creating a community at M-SParc. I must admit that l’ve missed it, although lockdown has been incredibly busy and particularly good in terms of innovation, I lost the sense of community during the period. This is the most important space in the Park, where the coffee is strong, and the company has the sparc. I'm looking forward to seeing you here!"

The headline "Value of Community" resonated with me because I had visited Nant Gwrtheyrn earlier that day.  It is now the home of the National Welsh Language and Heritage Centre but it was once a port for the export of granite "setts" or slabs.  There had been strong demand for granite throughout the 19th century as it had been used for cobblestones.  Several hundred workers had been employed in the extraction, dressing, loading and transportation of the mineral. Most of those workers will have married and brought up children in Nant Gwrtheyrn,  There was a school for those children and a chapel for Sunday worship and the big milestones of life such as baptisms, weddings and funerals.
The community at Nant Gwrtheyrn declined in the first half of the 20th century.  The last visit by a minister to the chapel took place in 1914.  The school closed in 1948.  The last family left the port in 1949.  The reason for the decline is that the world's highway authorities stopped using cobbles in road surfacing.   There are still a few cobbled streets and lanes here in West Yorkshire.  It is very uncomfortable to drive over them and I worry about my suspension whenever I do.  The growth of motor traffic inversely diminished demand for granite setts  Much the same happened to slate extraction as ceramic tiles and other materials began to be used for roofing.  In the South of Wales as in my part of England, steel making and coal mining also began to decline.
Wales contains areas of outstanding natural beauty which has attracted visitors from every part of the world. That has brought employment and facilities such as swanky restaurants, specialist retailers and tourist attractions that local residents can enjoy as well as tourists.  But they have come at a price.  Last week I stayed at Criccieth which I have visited more or less every year of my life since 1951. Outwardly the town has changed very little over the last 70 years but the big change is in the talk on the streets and in the shops and cafés. Welsh was everywhere when I was a child and teenager.  Now I have had to look for it in order to practise conversations in that language.  Sure, every street has a Welsh name and every kid in Wales has to learn at least some Welsh even in English speaking schools.  But when you hear them talk to each other their conversation is almost always in English.
Now I find that very sad and before someone protests that I am as English as John Bull and this blog is sentimental twaddle let me explain why.  First, tourism leads to depopulation because falling prices encourage outsiders to buy dwellings that locals can no longer afford.  These properties are unoccupied for much of the year.   Even if the new owners move to Wales they bring their language with them. This is not confined to Wales.  The same trends are to be found in the Peak District, Dales and Moors of Yorkshire.  It is also happening in the Spanish Costas, Bali and the Caribbean.
If Welsh ceased to be used in everyday business the loss would not be confined to Wales.   The North of England and Southern Scotland are sometimes referred to as the Hen Ogledd.   Welsh or a language very closely related to it was spoken there for many hundreds of years. There are still reminders in place names such as Pen-y-Ghent for one of the highest points in the Pennines and shepherds' counting systems.   Modern Welsh links to that time.
So on seeing Mr ap Rhisiart's post, I congratulated M-SParc and its tenants on their resilience during lockdown and their emergence.  He responded by thanking me for my congratulations and commending my contribution to building an ecosystem for the M-SParc community.  That's certainly my hope and my intention.  The laws that protect investment in innovation and creativity are complex.   Inventors and entrepreneurs need specialist professional advice and representation when protecting their brands, designs, innovations and creativity, raising funds for research and development and licensing their products and services.   Events like our webinars on World IP Day introduce M-SParc's tenants to such expertise.
M-SParc is an initiative of Bangor University.  The University was partially funded by small donations from working people across North Wales.    On the day that the University (then known as the University College for North Wales) opened in 1884, there was a procession of about 3,000 quarry workers who  had donated £1,200 to its formation (see "Early Years" in the Wikipedia entry on the University).  There is, therefore, a direct link between M-SParc and the mining and quarrying and other communities of which everyone connected with it should be very proud

Anyone wishing to discuss this article (though please not today as I am still in Wales) can call me on 020 7404 5252 or send me a message through my contact form.

Posted by Jane Lambert at 07:35 No comments: