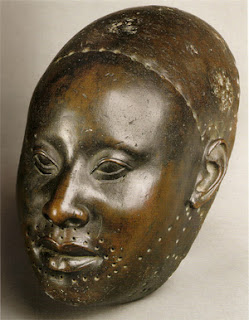 Yoruba is a language spoken by a large number of people in Nigeria and neighbouring states of West Africa.  It is also the collective name of the people who speak that language.  Between the 13th and 15th centuries, it was the home of a brilliant civilization centred on Ife that produced art of exceptional beauty an example of which appears in the photo above.

When it was discovered that an English company called Timbuktu Ltd, had registered the word YORUBA as a trade mark for a wide range of goods and services there was an outcry on Twitter.  Many people of Yoruba heritage and others were hurt and I commented on their reaction in Traditional Knowledge and Trade Marks in NIPC News on 30 May 2021.  A few days later the Intellectual Property Law Association of Nigeria invited me to speak at a webinar on the topic that they had organized on 2 Jan 2021 and I prepared The UK YORUBA Trade Mark presentation for the discussion.

Although the issues were different I was reminded of the Yoruba controversy when I read that the Welsh Language Commissioner had criticized the Intellectual Property Office for registering SNOWDONIA as a trade mark for a large English clothing retailer but not registering ERYRI for a small Welsh clothing manufacturer (see Language commissioner criticises decision to not grant Welsh trademark 7 July 2021 Nation Cymru).  The story was also pointed out to me at different times by two individuals who are prominent in Welsh economic development who could not be described as partisan or reactionary but I detected the same hurt in Wales as there had been in Nigeria.

I was asked for an explanation which I can't give as I am not privy to the discussions between any of the parties to the dispute and the Intellectual Property Office but I can state the law.   One of the grounds upon which a trade mark can be refused registration under the Trade Marks Act 1994 is that it consists exclusively of signs or indications which may serve, in trade, to designate the geographical origin of goods or services (see s.3 (1) (c)).   That may have been the ground upon which the Welsh clothing company was refused registration.  However, that prohibition is not absolute.   There is a proviso that a trade mark shall not be refused registration by virtue of paragraph (c) above if, before the date of application for registration, it had in fact acquired a distinctive character as a result of the use made of it.

I made a search of SNOWDONIA on the Trade Mark Registry website and found a very large number of registrations ranging from "Rubber Boots" by J.D. Williams & Company Limited from 8 April 1954 under trade mark number UK729050 to ice cream by Loseley (Manufacturing) Limited from 9 Oct 1998 under trade mark number UK2179272. Both J D Williams and Loseley are big companies that advertise their goods extensively so I guess that they would have persuaded the examiner that they fell within the proviso.

I also made a search of ERYRI and found that the word had been registered in combination with other words or devices ranging from Hafod Eryri for education and exhibition services all relating to National Parks cultural activities and the provision of food and drink and temporary accommodation by the Snowdonia National Park Authority to Eryri Snowdonia Gin.

In both Nigeria and Wales, it was felt that the law ought to be changed. Many in Nigeria and elsewhere have expressed the view that nobody should be allowed to register the name of a people, language and proud and ancient civilization as a trade mark. That would probably require a diplomatic conference. In Wales, there has been a drive to dispense with English names for Welsh geographical features even when they are over 1,000 years old. The registration of Snowdonia but not of Eryri has been seen by many as a gratuitous slight. While that is unlikely to have been the IPO's intention it is a sentiment of which legislators should take note. It is a topic that a Welsh law and innovation network could usefully consider.

Posted by Jane Lambert at 09:07 No comments: